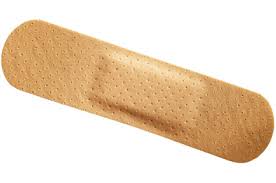 While in Russia for a wedding, my mother got a nasty blister on her foot and knowing that we had a night of dancing ahead of us, we decided that a Band-Aid was absolutely necessary. Since we were already out and about we decided to let everyone else return to the hotel and we went on a Band-Aid-hunting expedition.

We wondered up and down the cobblestone streets looking for the tell-tale medical symbol or the luminescent fat green cross which seems to universally shout "Note to all foreigners - there is a PHARMACY HERE." Unfortunately we found no such beacon of hope, but we did find a cobbler.

With a big stretch of my imagination I suggested to Mom that a cobbler might actually have something for blisters. I mean foot - blisters - blisters caused by shoes - shoes that a cobbler fixes... it could happen. So, much to the amusement of my mother, I approached the cobbler and asked if she spoke English - No. French? No. Spanish? No. Polish? No. Japanese? No. Italian? No. Portuguese? No. I had long since exhausted the languages I actually spoke but was on such a roll shouting out languages that I went on until I heard myself asking the Russian cobbler if she spoke Swahili (No.) and I realised that as fun as thinking of as many languages as I could was, this was not getting us any closer to getting a Band-Aid. Then I had the MOST brilliant idea. CHARADES!!! I am an ace charades player. Once, I got a room full of drunk people to "Odyssey" before the last bit of sand dropped in the little timer. That my friends is talent. Pure charades talent. If it was an Olympic sport, I would currently be sitting here, wearing a gold medal around my neck - because if you were a gold medallist why would you EVER take that thing off? I mean I wear pearls nearly every day, but that is just because I am lacking in the gold medal department. If I had one of those things, the pearls they would be gathering dust! I digress...

So I began. I was not sure there was a sign for object so I just went with film - I mean there must be an indie film named Band-Aid somewhere in the world. I admit this might have been misleading but there was no going back. I then held up one finger to her and dramatically, almost in slow motion, hit my finger to my arm once - giving her the universal charades sign for ONE WORD. I then counted out the syllables on my fingers Ban-Daid - I held up two fingers, making sure they were the right way around so that she did not interpret my two syllables as a two fingered salute and hit my arm twice hoping that this did not mean something totally different in Russia. About the same time an even more disastrous thought came to mind... the Russian word (or words!) for Band-Aid might not have two syllables. The confusion on her face was only outmatched by the despair in mine - the whole exercise was falling apart but I pulled myself together. I mean, I am a professional - I had never lost a charades audience, ever. Maybe neither this woman nor I spoke Swahili or Portuguese or Italian for that matter but damnit we were going to communicate via over-expression and excited hand gestures if it killed me!

In one smooth, graceful movement, I whipped my hands around in front of my face and shook my whole body to loosen up. She mirrored my actions and it was then that I realised we were going to get there together. We had broken down the barrier, we had tried and failed but we were starting again, from a blank canvas. I stood completely still head down for a good 20 seconds as the woman starred at me. I imagined she was preparing herself but in fact I think she was just totally confused and a bit nervous about what was coming but what she did not realise is that this is when the magic began.

The miming started with me mimicking the would-be drawer with the knife in it, which I pulled out and "touched" the tip of to show it was sharp. I then began chopping an air-onion and even pulled a few tears to my eyes (this was acting at its best) - with eyes full of tears I was obviously distracted from my cutting and this is when the "knife" slipped and I "cut" my finger. I dropped the "knife" and motioned to my finger and made gushing noises and I emulated blood spewing out of a wound. I stuck the tip of the "hurt" finger in my mouth and shook the sore hand a bit and then with finger back in mouth to stop the "blood" from dripping on the sidewalk, I reached up into the "medicine cabinet", moved around a few "vitamin bottles”, “eye drops" and "throat lozenges" and pulled down the box of the would-be Band-Aids. Cradling the "box" in the nook of my elbow, I "opened it" with my one good hand and pulled out a "Band-Aid" and gently wrapped it around my finger - held the "mended" finger aloft, pointed to the finger and gave a massive shrug coupled with a sticking out of my bottom lip - which universally means "what is this?" The cobbler, now totally into the charade shouted PLASTYR!!!! PLASTYR!!!! as she grabbed me in an elated hug and the three of us laughed and jumped and yelled Plastyr until we drew attention from other people on the street who had up until then ignored us likely because they thought I was INSANE.

I mimicked a pen and paper - asking her in our now fluent charade language to write down the word for us. This was quick thinking on my behalf as I had a flash forward to us in the pharmacy (once found) forgetting the word and having to do the whole charade again. I then had to get her to tell us how to get to a store where we could buy these plastyr - as she did not seem to have any - which was not a surprise to my Mom, but oddly was to me. After several explanations in Russian (she seemed to have forgotten all of her charade as quickly as she had learned it) we figured out that she wanted us to walk up the street, take a left and there would be a pharmacy somewhere. We spasibo'd her a few millions times and we all sort of bowed and shook hands as she kept repeating the directions in Russian to us and we walked off fairly clueless about where we were actually going, but armed with the word Plastyr.

We stopped and asked several people for directions by saying PLASTYR? and shrugging and making the sign for money. Somehow we ended up in a Russian casino before we actually made it to the pharmacy - but once inside and in the right line (we had to show the paper to three different people before we were directed to the basement and told to stand in one of 10 lines) I was confident we were going to be successful in our Russian adventure. When the symbol on our ticket matched the symbol above this one pharmacists head, I went up to the counter and said "Plastyr Spasibo" to which she replied "Brushvanish da nashivanti richishastarina ish ni da bratsavina kinisk shavinagratasha." I looked at her blankly and pushed the piece of paper under the window and she looked at me in disgust, got up and picked up three different packages and came back and in the tone a teenager would speak to a parent who just busted her kissing her boyfriend she said "Which one" in ENGLISH.... I pointed to one, paid, said spasibo as sweetly as I could and turned around to Mom and said "Wow… what an adventure…  I'm just glad we didn't need tampons!"
Posted by Kimmeh at 16:25 1 comment: