The Scent of a Young and Modern Woman

"Peach Trees in the Fall" 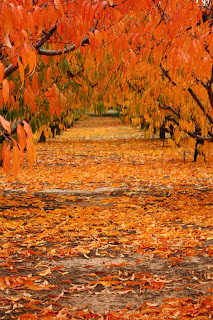 YM (Young and Modern) Magazine was one of my favourites in college. It was likely aimed more at the adolescent than the young adult - but that appealed to me - plus I had a friend who had submitted her boyfriend to the annual "boyfriend of the year" competition and he was one of the runner-ups. Their photo and her article about why he was a great boyfriend filled an ENTIRE page of the magazine. She was kind of my hero (even though they had broken up by the time the magazine went to print - but hey ho... The life of a young and modern woman is anything but predictable.)

So - in one such magazine there was an intriguing article about scents that boys like. Essentially the article said that boys like food - so make yourself smell like food and they will love you. Thankfully they left out suggestions such as "stand next to a BBQ before you go and speak to the guy you are eyeing up" or "rub your wrists and neck with bacon and stand near the boy you have been dying to talk to all year". Instead they suggested vanilla and fruit tones and cinnamon.

Being a Young and Modern woman - I took this advice to heart and bought some peach body spray that was on sale at Bath & Bodyworks. (Body spray was ALL the rage in the late 90s). After buying it, I was totally cool, and totally modern, and could not wait to try it out on my unsuspecting victims... Rrrr... Boys.

So, before my roommate and I headed out I doused myself in the stuff. I mean, if you are going to catch a boy with your scent: He needs to be able to pick up your scent....

We parked ourselves at the bar and were just chatting to each other when I heard these two guys who were standing a few feet behind us talking to each other. One sort of sniffed loudly and said to the other "do you smell that?" I sat up in my seat and sort of opened my eyes and nodded slightly to my roommate as if to say "see.... It works!!" As the other boy sniffed the air and said "yes... It kind of smells like..." And before he could say "amazingly delicious peaches mixed with the gorgeous smell of a beautiful woman who I must now seek out with my nose" his friend finished the sentence for him saying "a Glade Plug-In?!" And his friend laughing and nodding in TOTAL agreement said "YES!!!! That's it!! A Glade Plug-in!!" Then to my total horror the first friend turned towards us and nodding in our general direction said "I think it is coming from over there. It's a little overpowering - let's step outside and get some fresh air." I turned to my roommate and said "next time I am just rubbing myself with bacon".
Posted by Kimmeh at 15:22 No comments: