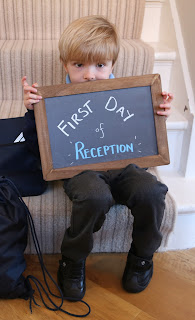 I the UK, before your little munchkin starts Reception (read Kindergarten) the teacher pops by for a home visit. We assumed as long as we did not have a meth lab in the kitchen, dog bowls on the floor with the kids names scratched into them and we had at least one books around and we'd be okay. What I had planned was well dressed and groomed children, a clean house, hot banana bread fresh out of the oven, some classical music playing and be dressed.... maybe even showered.

However, that was not to be. I don't work on Fridays and my husband had taken the day off so that we could have one last hurrah before Luke started school. Since Ms Link was supposed to be coming over for our home visit on Saturday morning at 9:45, we decided to go to Legoland on Friday to avoid the crowds since most kids would be back in school already. When we got up and threw our curtains open to greet the day, it greeted us back - by spitting chilly sideways rain at us. It was not just miserable it was like a depressing scene in an already traumatically sad movie.

We shifted gears and since our 4-year-old starts every day asking to watch TV and refuses to get out of his PJs  - we decided we would embraced the rain and the inclinations of our post-toddler/pre-boy and made it a PJ/movie day! I was wearing the equivalent of hot pants (as soon as I fall asleep my body radiates more heat than an atomic bomb - so hot pants may sounds risqué but they are a necessity) and it was about 50F (that is.... rrrr... something cold in Celsius) outside in the freezing rain, so I changed into a pair of PJ bottoms I had not worn in forever and threw on a really comfy cardigan. We had only given the kids some Cheerios and a banana as they watched the first movie of our marathon (The Good Dinosaur - SO GOOD) so we sat down for second breakfast (yes, we are Hobbits) around 9:15 and had porridge (so messy - our 2 year old gets it all in her hair and Luke always ends up dropping a few sticky spoonfuls on his shirt any time we have it - and this time was no exception).  I finished eating and got up to grab something when I realised that the reason I did not wear these pj bottoms was because I had caught them on a nail and literally ripped the entire backside out of them. So I did what anyone would do - I shouted for my husband to look and did a bootie shaking dance in his direction. Luke had finished his porridge as well so I asked him to please go and take off his night nappy and put on big boy pants - which he obediently did - but managed to put them on backwards and then refused to put his pyjama bottoms back on (I CANNOT WIN). I was chasing him around when I saw something odd. Maddie, our two year old was standing without any bottoms on (no nappy/diaper -nothing) and saying "poo poo" - which I found, to my horror in her nappy which was lying on the floor in the entrance to the house. I cleaned it all up and was getting her dressed again when I stepped on something which I knew I did not want to step on. I had missed a poo! I want to sit back down in my torn out bottoms and have a cup of coffee - but as soon as my bum hit the chair I heard a knock on the door. George and I turned and looked at each other to see if one or the other of us had some kind of recognition as to who might be knocking at our door when neither of us  were showered, or dressed and still had our hairy morning teeth (and breath) kicking. Nope. Blank face from George, inquisitive wrinkle-making face from me. Luke ran to the door in his backwards undies and opens it to HIS TEACHERS. They were there for his home visit. Oh! Joy! I had the day wrong.

George grabbed Maddie and legged it upstairs to get themselves dressed. Meanwhile, in my state of shock I think I welcomed them in and ushered them (walking backwards to avoid them seeing my knickers) over toys, half eaten bananas and a discarded nappy that I had not run upstairs to the nappy bin yet - into our living room where the lovely set up train looked as though it has been hit by a magnitude 12 earthquake and a tsunami where Maddie had sprinkled her water. (I really hope it was water). I then failed to offer them drinks or food and explained that we were expecting them tomorrow when we would have had banana bread and showers. George joined us, dressed but with hair sticking up in various directions. While we got Luke to demonstrate his impressive pj-bottom-putting-on skills the teachers engaged him in conversation which went like this:

Teacher: what did you do this summer Luke?
Luke: Watch TV

It is important to note here that we were militant about TV with Luke. He was literally not allowed to even face it until he was 2. And his summer? He went to the US, to Switzerland, to the beach and for walks in the woods. We explored bugs in the garden and built intricate train tracks with Duplo villages nearby. We went to the zoo and botanical gardens, swimming and adventuring. But what does he tell the teachers he did all summer? WATCH TV! Cheers kid.

Luke disappeared for a moment and I talked to Mrs Alikhan and Ms Link about some things he likes to do and I apologised that we did not have his "All About Me" form filled out since that was on the day's to do list. As I was trying to redeem him by explain his genius artistic streak (he really is the most talented 4-year-old artist in our family) - he came in donning his newly purchased pencil sharpener/eraser (rudely called a rubber in the UK) combo and to my horror went up to both teachers and shoved the eraser under their noses and said "smell!"  They both raised their eyebrows and nodded in agreed fake excitement saying "it smells like a rubber". "Please, Please can the visit end now?" I scream internally. My eyes then fall on Maddie who has climbed inside the Duplo box and is rocking like a child in a horror-film-style orphanage potentially sucking her thumb for the first time in her life. I can't be sure because I think I started to block things out at this point.  While I was distracted looking at crazy-pants, Luke takes Mrs. Alikhan by the hand and leads her into the play room where he starts to show her all of his toys.

Sadly (in no ones opinion) it was time for them to go - so I summoned Luke back into the living room to say goodbye (no way was I getting up and leading the charge to the door with my drafty bottoms) when they remembered that they needed to take a PHOTO of Luke with the class's stuffed hedgehog for THE WALL.  I know I mentioned that Luke was in his PJs - but what I failed to mention is that he was wearing his FAVOURITE pjs. His REINDEER Christmas themed pj top. Covered in porridge and with his sweet surfer hair sticking up in that fresh-out-of bed fuzzy look. It was the first (and hopefully the last) time I did an all-time cliche lick of the hand/smash of the hair move. It did not work. I think they got a photo of him with his eyes open but I could not bare to look. All I could do is thank them for coming and crab-walk them to the door.